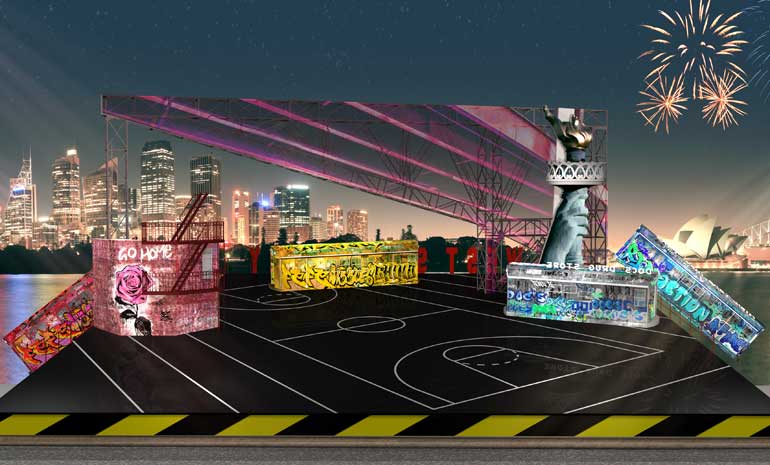 In 2019, Handa Opera on Sydney Harbour will bring the full splendour of New York City to Sydney's waterfront with a dazzling set design offering a brand new take on one of the 20th century's most iconic musicals.

One of Australia's most accomplished theatrical designers, Brian Thomson, is shaping a spectacular vision for West Side Story that will invigorate Sydney's iconic harbour with the spirit of New York, the city that never sleeps.

Renowned for creating sets that feature huge iconic objects that encapsulate the story, Thomson's remarkable set design will be dominated by a giant 15 metre tall highway overpass that will soar 30 metres across the length of the stage, symbolising the gritty underbelly of New York's urban gang culture.

“Having done the giant chandelier for La Traviata and the towering letters of the Carmen sign I wanted to continue with a big idea,” said Thomson. “My aim for West Side Story is to present a technicolour version of the graffiti and the grunge of New York City.”

The harbour stage, which is almost two and a half times larger than any other Australian indoor stage, will host one of the most daring Handa Opera on Sydney Harbour set designs to date, taking full advantage of the open air setting.

Featuring a huge catwalk that can support the entire cast, and a network of ladders, staircases and walkways that will be used by performers and crew throughout the show, this fearless design structure will utilise the open harbour backdrop to its full potential.

Thomson is no stranger to challenges of this scale, having created spectacular sets for Priscilla: Queen of the Desert the Musical, The Rocky Horror Show, The King and I (for which he won a Tony Award for Best Scenic Design), New Year's Eve events and the Sydney 2000 Olympic Games Closing Ceremony.

With sophisticated lighting design by John Rayment, the whole stage will be lit using a variety of different lighting techniques to create an atmosphere reminiscent of the New York City lights, bringing the full urban splendour of the Empire City to Sydney's waterfront.

Handa Opera on Sydney Harbour is supported by the NSW Government via its tourism and major events agency Destination NSW.