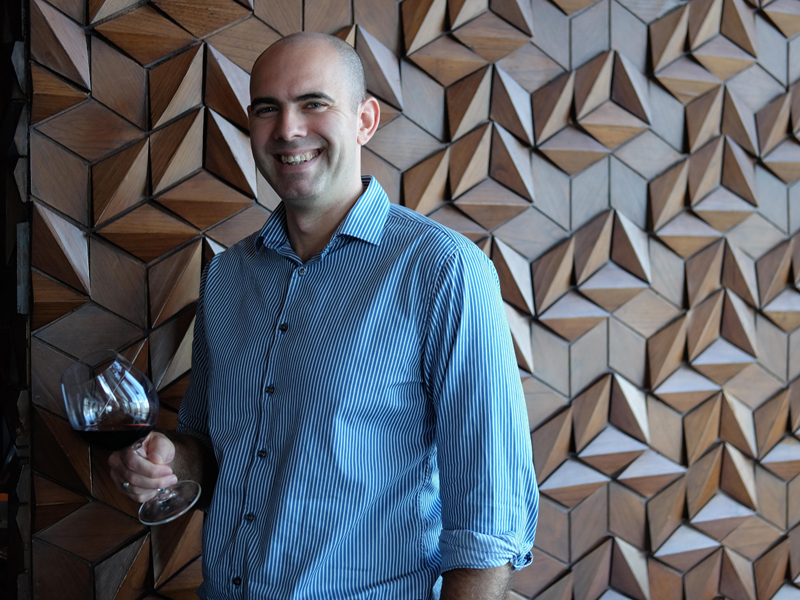 Sam Stephens, the new brand ambassador of Penfolds for Indonesia, paused during our interview after I asked if we’d be opening a bottle of g3 from the Australian vintner’s new collection.

He smiles. “Even senior winemakers can’t get a bottle for their cellars.”

The latest Grail wine from Penfolds, g3, made a glitzy bow at Hong Kong in November 2017. A very limited run of 1,200 bottles was snapped up.  It’s not likely that the owners have since opened their bottles, each of which had an A$3,000 price tag. Some might be dreaming of wine auctions. Others might be savouring the notion of how the wine’s tertiary flavors will emerge in years to come.

Stephens, though, has had a glass. It’s part of the job. “It is distinctly different to any Grange I’ve tried,” he said. “There’s a huge depth and complexity.” Penfolds Chief Winemaker Peter Gago is the mastermind behind g3. He’s blended three vintages of Grange, the wine that’s propelled the vintner to global acclaim for more than 70 years.

The g3 is comprised of a 2012 Grange that’s received extra barrel ageing, an as-yet-unreleased 2014 Grange, and a 2008 Grange from the bottle. The 2008 booked 100 points from Wine Spectator and Robert Parker’s Wine Advocate. While Gago has been silent on the exact proportions of the blend–it’s not something you could do at home, Stephens said–the chief winemaker was likely inspired by his salad days making sparkling wines, where sophisticated blends are more common.

“Some people love the maturity of it,” Stephens says of Penfolds’ Grange. “Some people love its raw, unctuous, youthful state. They come knocking on the door for the next release: ‘Our cellar’s empty again.’”

I pause to look up the definition of unctuous and grin. Stephens evinces dramatic flair and deep knowledge when talking about wine.

He’s based in Singapore and has been studying to become a Master of Wine–a international certification held by a scant 350 people across the globe. Stephens says that his vacations have since become field trips to vineyards and he spends hours emailing vignerons and winemakers about abstruse topics like fermentation.

During our interview, he adroitly transitions from the effects of the Cape Town water crisis on South African grape vines to a discussion the documentary Sour Grapes, about Rudi Kurniawan, the Indonesian citizen serving a 10-year sentence in the US for wine fraud.

After recommending that I pick up a copy of Benjamin Wallace’s Billionaire's Vinegar to learn about the scandal surrounding the auction of wine allegedly owned by Thomas Jefferson, Stephens turns to a new topic: what Penfolds has been doing to stop counterfeiting in China, where police have impounded tens of thousands of fake wines from the Australian vintner.

Penfolds will bolster its existing anti-counterfeiting measures with sophisticated enhancements to its for every bottle of wine from BIN 28 and above, starting with 2015 vintages, according to Stephens. The new bottles will come to market over time, e.g., the 2015 St Henri Shiraz will get the measures in the collection to be released later this year, while the 2015 Grange will have a similar treatment when it’s released in 2019.

Most visibly, the Penfolds crest will be embossed on the label above the shoulder and “Penfolds Wine” will be stamped into the bottle under the label, in addition to more subtle measures, such as secret marks in labels and corks.

However, the reason Stephens was in Jakarta was to tout the local release of the Penfolds’ latest collection. “I don’t think there’s a bad vintage there. There’s not even a good vintage. They’re all very good to excellent,” he says. “With 15 predominately young wines, you can feel like you’ve just done 13 rounds with a heavyweight boxer-they can be very heavy going on the palate. But there’s a beautiful drinkability about the wines when they’re young, which is beguiling."

Stephens identified a few standout bottles from the 2017 collection.

Penfolds’ tasting notes describe the wine as a “formidable” Grange of depth and “brooding complexity” that will provide life and longevity for decades to come. “A blockbuster,” according to Stephens.

Stephens said that cooler temperatures in 2015 yielded fruit with a little more elegance, making for a Shiraz with less intensity and power, and a mellower taste. The palate is vibrant, fresh and lively, according to the tasting notes, while the tannins are long.

BIN 389, a perennial Penfolds favorite, is generally phenomenal for its cellarbility, Sam says, noting that some 1970s vintages have recently been opened and have developed delicious tertiary-phase notes. But don’t be afraid to open a 389 and enjoy it in its youthful state. “There’s not one binary point in a wine’s life where it’s the best,” Stephens adds. Try a wine’s young expression and watch it evolve. “What you do is buy 24 bottles of 389, and 1 bottle of Grange. Drink a bottle of 389 a year. When you finish those your Grange is ready.”

This BIN 311 is a departure from old-school Australian Chardonnay, boasting a lovely, linear acidity that comes from ageing in older French oak barrels, Stephens says. Single sourcing grapes for the Chardonnay from Tumbarumba, with its colder clime, might have been risky, but the end result is a wine with some complexity and a slight savory character.

“It’s quite orchestral. The moment you don’t have one bassoon in the orchestra you’ll notice it missing, but you can never identify it when listening to the whole ensemble.”

Given the choice of any Penfolds bottle for his cellar, Stephens would go with this single-block Barossa Valley vintage, made with grapes from 137-year-old cabernet vines, which he says are the world’s oldest. It’s the same wine chosen for Penfolds Ampule Project, where hand-blown glass containers containing the Block 42 were sold for a staggering US$168,000 in Moscow in 2014. The project was one of Penfolds big steps forward into the highest end of the market.

“I’ve been fortunate to try it–from the bottle, not the ampule–and it was ethereal. It wasn’t this massive, jammy blockbuster of a wine, but it has something about it. I now understand why we did this project."

“Well thought out by passionate people,” Stephens said. Emirates will tailor wine lists to specific destinations; meaning flights to Sydney will have a curated selection of Australian wines, including Penfolds.

On Screen: Stephens says that Penfolds has been partnering with National Geographic to make an upcoming series about the vintner’s re-corking clinics. The show promises to be a wine-focused Antiques Roadshow, where experts like Gago will open bottles from collectors, assess the wine inside and then top off and reseal the bottles. It's a story in every bottle, Stephens says.