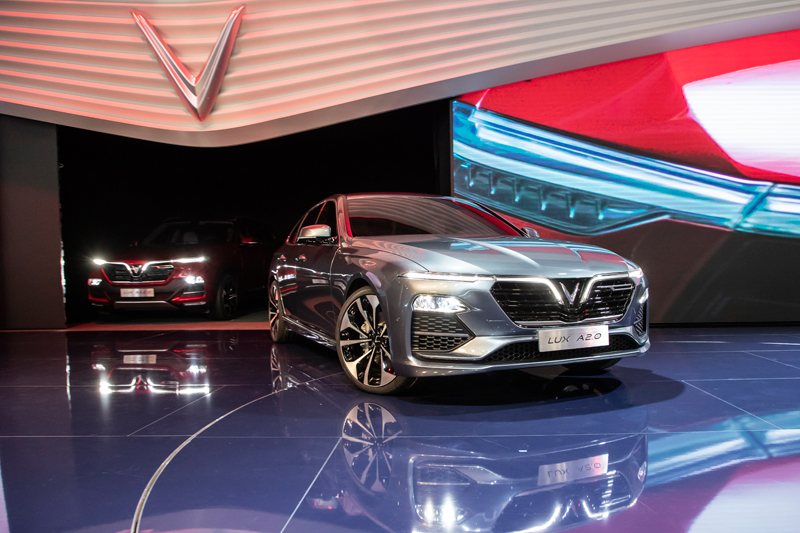 A global audience of over eight million tuned in to witness the international unveiling of VinFast, the first volume automotive manufacturer from Vietnam, at the Paris Motor Show on 2 October 2018. During the show the first two models from the new brand, the LUX A2.0 sedan and the LUX SA2.0 SUV attracted the attention of media and car fans from all around the world, as well as global style icon David Beckham.

VinFast became the first Vietnamese manufacturer to attend a major international car show, as it prepares to launch the new models in Vietnam in mid-2019. With sustainable financial backing from its parent company Vingroup and cooperation with leading engineering and design partners, VinFast's first two cars have been developed in accordance with international standards and perfectly represent its core values and philosophy of ‘Vietnamese – Style – Safety – Creativity – Pioneering’.

The arrival of VinFast on the global automotive stage attracted the attention of AUTOBEST – a leading European automotive awards organisation, which presented the company with an unprecedented ‘A Star Is Born’ award.

“At the Paris show, our ambition was to establish Vietnam on the map of the international automobile industry,” said Mr. James DeLuca, CEO of VinFast. “We worked hard at VinFast to prepare for this momentous occasion and overcame a lot of difficult challenges. We are very proud that the introduction of VinFast and our first two models to the world received such positive feedback.

“The level of interest from the international media, automotive industry, important guests and the public has exceeded all our expectations. We are also honoured to receive an award from the very first show we attend. The success of our international debut in Paris will inspire VinFast in the next part of our journey, producing our family of world-class vehicles that meet international quality standards and customers’ expectations.”

The worldwide media was captivated by the incredible VinFast story, with the launch of the LUX A2.0 sedan and LUX SA2.0 SUV capturing headlines and high-profile coverage around the world.

The brand’s debut in Paris attracted the attention of reporters from around the world, with the broadcast of the presentation witnessed by over eight million viewers in Vietnam, who watched live by satellite link on VTV1 – Vietnam’s primary broadcaster – and by global audiences on social media and over the internet.

“Vietnam is such a beautiful country and I can see how the VinFast design team have been able to bring some of that beauty alive in the lines of these amazing new cars,” commented Beckham. “It’s great to be here in Paris to celebrate the arrival of a new car manufacturer on the global stage. The passion that you all have for the cars is infectious. It’s an inspirational story and I’m proud to be here at this important moment.” Miss Vietnam 2018 Tran Tieu Vy also attended the press conference.

VinFast presented with special ‘A Star Is Born’ award in Paris

The impressive debut of VinFast was recognised with the presentation of the ‘A Star Is Born’ trophy by AUTOBEST, a leading European automotive awards organisation. The accolade was awarded by a panel of independent automotive writers from across Europe.

AUTOBEST’s Chairman Dan Vardie presented the trophy at a special ceremony at the VinFast booth in Paris on 3 October. “What VinFast is doing is extraordinary,” commented Vardie. “This brand has developed two models and built an all-new advanced facility with mass-production scale in Vietnam within 12 months. Even more impressive is that the plans and aspirations of VinFast are far beyond building a car company; it will contribute to the foundation of Vietnam as an international automobile manufacturing nation. We are delighted to reward the achievements of VinFast with the ‘A Star Is Born’ trophy - an unprecedented category for the AUTOBEST awards.”

VinFast’s position as a representative of Vietnam on the international stage was clearly demonstrated as the brand welcomed a series of important guests during the two week show in Paris.

The Vietnamese Ambassador to France, His Excellency Nguyen Thiep, was a special guest at the press conference on 2 October and the AUTOBEST ceremony the following day. Mr. Dao Duc Toan, Deputy Secretary of the Hanoi Party Committee, led a delegation of the committee to visit the VinFast booth on 5 October.

VinFast also held a special ‘Vietnamese Day’ event at the booth on 6 October, welcoming more than 1,000 Vietnamese citizens living in Paris. Mr. Nguyen Duc Khuong, President of Vietnam Association of Science and Professionals in the world, said: “Vietnamese Day was a proud moment for us. It allowed us to demonstrate our cultural values to international friends and share the success of Vingroup – the newest representative of Vietnam to reach the world.”

Show visitors were treated to an emotive glimpse of Vietnam’s rich culture and traditional way of life through a dramatic acrobatic show that charted the transformation of the country into a dynamic, innovative high-value industrialised economy. Produced by Vietnam’s leading professional dance troupe, Lune Productions, the show was performed on each of the motor show’s press days and twice on all the show’s public days, drawing the attention of the Vietnamese community and international audiences alike.

VinFast is a subsidiary of Vingroup, the largest private enterprise in Vietnam. With 25 years’ history, Vingroup is aiming to become a world-class Technology – Industry – Services corporation. VinFast is the first brand to be launched to carry out this plan.

Deliveries of the first VinFast sedan and SUV cars will commence in Vietnam from September 2019. In addition, VinFast is developing a wide range of vehicles, including electric cars, city cars, electric buses, and electric scooters. The company also plans to export its products to international markets in the coming years. VinFast vehicles will be manufactured at a modern 335-hectare plant complex in Cat Hai, Hai Phong, northern Vietnam.